The most common dream that players have is to win a life-changing amount of money in an exciting environment. A popular game that has constantly seduced players is Monopoly Megaways, an original slot game released in 2019 by an Australian game developer called Big Time Gaming. Today, Monopoly Megaways sites are the world’s most seductive ways to have fun alone or with your friends. The web-based slot Monopoly Megaways comes with up to 117,649 ways to win, cascading reels, and a big bonus round multiplier guaranteeing big winnings. As this iconic slot is based on a family board game offering action-based gameplay and thrilling gains, here is the beginner’s guide.

Description of the Game

If you are a slot lover who enjoys playing the classic board game Monopoly, you will appreciate its improved version designed with more innovations, Monopoly Megaways. When choosing to play the Monopoly Megaways slot, you will be taken to a 6-reel game where you are asked to spin the reels with the goal to make winning combinations. You can play as little as 10p but if you want to enjoy thrills, you can increase your bet by up to £40 per spin. Monopoly Megaways slot machine has an RTP of 96.50%. This means the amount of money that the slot will pay you back over time. The Monopoly Megaways is a slot that goes beyond just offering huge gains, its monopoly-themed design with stunning graphics and animations will surely seduce players. Evidently, the main symbols are the original Monopoly pieces such as the golden battleship, the car, the top hat, and the dog. You will also see the classic playing card symbols that include A, K, Q, J, 10, and 9 royals. The top hat is the highest-paying symbol, which can pay you 50x for 6 across all reels. It is followed by a ship symbol, which rewards you up to 5x for six items on a line. During the base game, you can make a prize up to 3,500 times the bet. 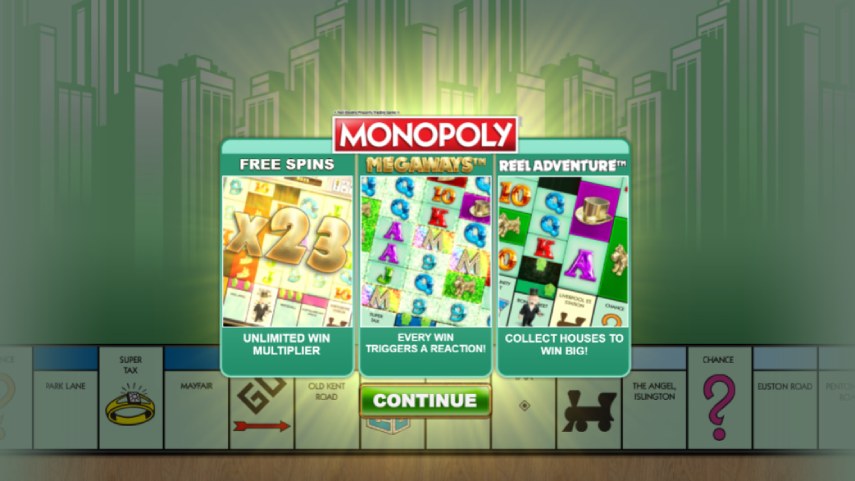 A golden M is a wild symbol that has the role to substitute for all other symbols to complete possible winning combinations. As stated above, all the symbols in the slot are cascading, meaning that every winning combination will disappear and be replaced with new ones as a waterfall. This allows players to collect massive winnings. To open the free spins bonus, you need to land by chance the Monopoly Man that will reward you with a couple of free spins. During the free spins feature, you can boost 14,700 times the bet in one spin. What’s more, hitting five houses will grant you 8 extra rounds for every consecutive feature trigger. You will receive an unlimited multiplier that can increase each time you own utilities, properties, and train stations. Another possible outcome is the Community Chest. Actually, when you hit this feature, you will be allocated a random fortune to your name, meaning possible big prizes. Take also a special look at the car symbol because landing 3 or more items will grant you up to 0.8x win.

Monopoly Megaways is a result of the partnership between Big Time Gaming and the board game designer, Hasbro Gaming. The idea to launch profitable slots designed with Megaways game mechanics started in 2016 when Big Time Gaming developed a slot called Bonanza. This game’s popularity has increased so this Australian gaming vendor had the slightest idea to design Monopoly Megaways, a slot inspired by the family game, Monopoly. This slot provides incredible winnings through an innovative random reel modifier called Megaways. At first glance, the game is attractive with multi-story buildings as a background decorated with brilliantly colored symbols. The reels seem simple but they can offer you more opportunities to trigger huge gains. Though the Monopoly Megaways slot lacks bonus features, you can collect multiple prizes from a single spin through the icon Monopoly that moves down the board. It won’t stop there, when the generous Mr. Monopoly touches the Go area, you will receive the maximum Megaways, meaning 117,649 ways to win. The free spins round is the most lucrative because when you are lucky to open this feature, you can hit 14,700 times the bet amount in a single spin.

4 Factors to Consider in an Event Management Platform

How to Fix Pname Com Facebook Orca Error on Android