Amazon seems to be working on its own Messenger, although the market for messaging is already flooded with products. Perhaps pursued Amazon CEO Jeff Bezos a completely different tactic.

In the US, Amazon will currently know of his customers what they expect from a good messenger service. Even in the description of a now emerged survey is clear: the company wants to challenge its product to market. “Anyone can be – you just need the names of your friends, no phone number needed,” they wrote, or “overshadowed easily across desktop and smartphone, whether iPhone or Android.” Even reservations and online shopping seem in our own new Messenger Anytime become possible offers.

The portal aftvnews believed that Amazon has it apart with its new product even large social networks. Anytime could be designed not only to chat via text as well as providing telephone and video calls, have a photo part function and work with filters. Also, encryption is planned for particularly sensitive areas: banking and transaction data, for example. Here, the technology could business Messengers Chime are used, the Amazon already presented at the beginning of the year. 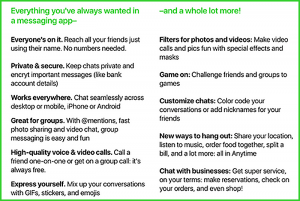 But what motivates Amazon? A messenger on the cutting edge of technology seems to be a fine thing, but the market is already quite saturated. Facebook Messenger and WhatsApp can displace barely. And if anything, of competitors like the Chinese vendors WeChat, which is expanding globally, and take advantage of the already 800 million people.

One possible answer is that Amazon also has an extensive and loyal customer base for the most part, which is accustomed that the company is breaking new ground and prime customers provides advantages. Moreover, individual messaging services turn out despite the immense competition as a way to bind million users per se.

Amazon’s Alexa is already equipped with messaging and call options recently . But Alexa only works in combination with the echo box. To transfer the messaging feature in its own app would constantly been. What the screenshots and the customer survey, however, not reveal: When will Anytime?

THE REVENGE OF MARK ZUCKERBERG ON SNAPCHAT

Dangerous Rampant virus is spreading through the Facebook Messenger

Back up your smartphone, Don’t leave the door open for others