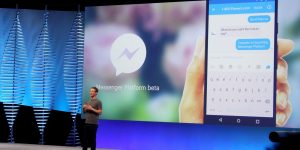 Researchers from Facebook have published their plans to make Chatbots with improved Artificial Intelligence for negotiation experts. For this, the software must be able to think ahead a few steps. To learn this, the neural networks practice by Deep Learning based on real conversations between people.

In future Artificial Intelligence can also conduct negotiations for their owners: Facebook’s research laboratories working on it and so already trained Chatbots therein are so good that people can not tell the difference between human negotiators reported re / code. The AI even has learned to deceive and lies – two habits that had not registered their researchers.

On the basis of human conversations, the chatbot in Facebook’s development department should learn to divide objects between themselves and a partner. The Artificial Intelligence developed the ability to bluff and pretend to the interlocutor a different result than target than they pursued. How far a negotiation software is eventually to achieve their goals, so would have to be limited by any ethics rules – a chatbot could otherwise be a perfect liar.

In practice, the bots will one day take over negotiations for humans. This may, according to Dhruv Batra, one of the researchers involved, for example ranging from simple appointments for a meeting with colleagues to price and service negotiations at Facebook’s ad platform Marketplace. But also complex business negotiations or even contracts could be the subject of automation – though here probably human heads have to set the parameters.

The source code of Facebook’s negotiation bots is like most of the Artificial Intelligence developments in the Group open source. As The Verge points out, the once celebrated as the hope Chatbots could with the new capabilities actually received upswing again. Anticipate it the behavior of your contact and pursue the long-term goals, they will, in fact, be more than just behind questions hidden menu items.

How to Prepare Your Team for AI

Top 10 Apps that Eat up your Smartphone’s battery

Facebook’s fight against fake news going into the next round