As a last major network, LinkedIn now allows its users to upload native videos. However, to set itself apart from Facebook, YouTube, and Co., the careers network is based on a special business function when uploading video.

As a career network, LinkedIn’s focus is not primarily on disseminating content. Nevertheless, the management day has been pursuing a content offensive for some time.

In this context, for example, the last BOM change was introduced for private communication. Now the network in a test phase to US users a native video upload.

The videos are played in the newsfeed of the users and start automatically without sound. We already know this from other social networks like Facebook and Twitter. In the settings, the LinkedIn users can issue the Autoplay function.

When the video upload is rolled out in “the coming months” (quote of a LinkedIn speaker) worldwide, LinkedIn adds another icon to its status field. In addition to the camera icon for uploading photos (already exists), an icon for moving picture content should also be implemented.

With this button, you can either record videos directly (not live) from the app and then post them or upload them from the video archive of your own smartphone.

The maximum length of a video is ten minutes. The recommended length of posts is, according to a LinkedIn speaker, between 30 seconds and five minutes. As seen is a video from three seconds.

As far as we know all the video features of LinkedIn already. In contrast to clumsy copy attempts, which unfortunately recently determined the social media world, the developers of LinkedIn, however, have made a few thoughts. A valuable further rotation, suitable for the network, has emerged. 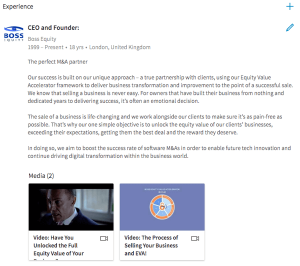 In addition to the well-known statistics for social videos (views, Likes, Shares), LinkedIn also shows the publishers a selection of people, including their employer and job title. This allows the operators of a LinkedIn page to identify exactly whether they are addressing the desired target group with their videos.

Whether this means the business function will allow users to spend more time viewing videos on LinkedIn is as unclear as to the question of whether the video upload could be the first indication of moving image formats within the LinkedIn cosmos.

WhatsApp wants to start advertising to earn money with its users

The Revenge of Mark Zuckerberg on Snapchat