If you are familiar with FlowPlay’s previous projects, Vegas World which has been launched in 2012 and Our World with the date of launch in 2008, then when you’re going to play this new game, you won’t have any problem. The company has gone over the top with this new project as it offers over 40 casino-style games, nearly 30 slots and various other interactive feature.

Before we begin explaining this new title, let’s talk a little bit about the creator of the most powerful immersive gambling platform.

The company was founded in 2006 with a dream of creating the ultimate engaged online communities around casual games. Since then, we can safely say that FlowPlay has done an incredible job which can be seen in various projects like Our World and Vegas. Most importantly, it developed massive multiplayer online games which have enabled the communication between 75 million players from all over the world.

Why You Should Start Playing Casino World

This free-to-play social casino game comes with various interesting combinations of games where you can also chat with your friends, exchange virtual goods, host parties and even become the tycoon of your casino empire. You can find these games here.There are tons of other reasons why you should try it out, but we’re going to present you only the top ones! 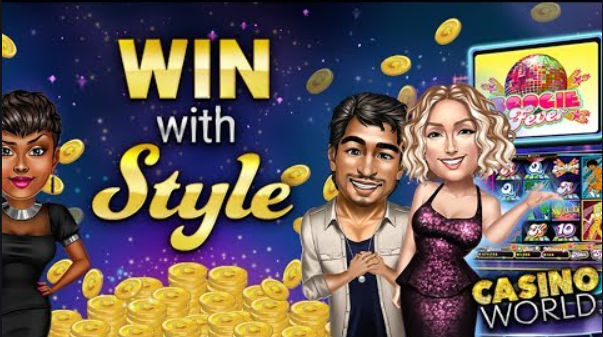 Play A Wide Range  Of Games

As we’ve mentioned above, this itsy-bitsy world contains 45 casino-style games such as slots, Poker, Blackjack, Bingo, Roulette and even some social sports betting. It will meet everyone’s preferences with this selection of titles.
The cherry on the top is that you also have at your disposal over 200 ultra-realistic new player avatars with distinct personality features, clothes and other exclusive traits.

This is a new level-based system, created by FlowPlay, which is used to pay the players in loyalty Charms, additional coins, new buildings and last but not least in Party Passes.

To make it even better, as you gain wealth in the game, you will also have the chance to unlock new types of rewards which will tell an interactive story about how the Casino World universe has been created. This way, you’ll get an insight into the creation of it.

Build Your Own Casino

Yes, that’s right. You  get to create your own casino empire with tons of building and attractions, from luxury hotels to fun clubs and glamorous slot halls. This is thanks to the multi-billionaire which is literally called Mr. Cash who helps you in your endeavour.

Every time you log in, you shall be rewarded with a small but significant amount of cash which can only help you develop your world. Plus, you may also invite your friends to your own version of the Las Vegas trip.

It took almost two years for the company to develop this desktop version universe, but it has done a great job. From its interface to its wide array of games, the nice rewarding system, everything about it it’s perfect. So, you must definitely try out this free-to-play game and create your own universe!

How To Get A Job in Business & Data Analytics