Top 10 Apps that Eat up your Smartphone’s battery

If the smartphone battery at noon is empty again, although he was charged overnight, which is mainly due to Facebook and Spotify. The two apps are to be the largest battery eater on Android smartphones.

Determined and documented has the Dutch anti-virus developers AVG Technologies in its  Android App Performance Report Q1 2015 . For which the company has analyzed the statistics of over one million users of AVG antivirus app Android and summarized the battery, memory and bandwidth consumption to a total value.

The company from startup apps that start automatically and continue to run in the background, and apps has distinguished that call the user active. Especially with the auto start apps Facebook has the inglorious place 1. The app runs continuously for most users in the background, thanks to regular status updates and notifications.

Spotify, however, is among the apps on the front rank, that are actively initiated by the user. Alone streaming already used up huge volumes of data. It is also possible with Spotify to store up to 3,333 songs locally, which further burdens the memory of a smartphone.

Another battery-eaters in the top ten of the AVG reports the game eight ball pool, the “irritating” eat downright much resources. But the Amazon Kindle app, Instagram, Netflix, the Facebook Messenger and WeChat are found distributed in both top 10 lists. After all, most of the apps are at least actively used. 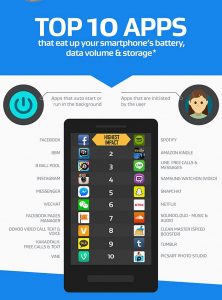 Also, some apps that work completely unseen burden the smartphone by their steady work. This includes, among other things, the safety program Knox, AVG has identified as “major Battery user” on the Samsung Galaxy’s, and the antivirus app “Lookout Security and Antivirus“. In addition, the pre-installed security policy updates from Samsung and the NFC service Beaming Service battery life, according to the press AVG Report.

HOW TO OPTIMIZE YOUR ROI WITH SOCIAL MEDIA MARKETING :

Back up your smartphone, Don’t leave the door open for others