As we all know that Whatsapp is owned Facebook, according to the recent reports by the company officials messaging service Whatsapp has recorded 1 billion active users and also mentioned that there are more than 1.3 billion monthly active user base.It is also clear that around 78{e7d47c856744df2248f2195fd30fbdddbceff01679799ef4d661e6a47ab6faaa} of Whatsapp’s monthly users are using the app daily.I hope no other app can have such an outstanding record. 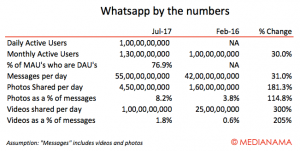 Mark Zuckerberg also stated that they had more than 340 million video calling minutes per day across the globe,that is on an average of 55 million video calls are made each day through whatsapp.It also mentioned that it was doing 100 million audio calls per day and more over 250 million people across the globe use whatsapp status everyday,which,to be honest is a bit of surprise.From the above data it is also clear that Whatsapp is not only a messaging service from now.

As whatsapp declined to disclose its daily and monthly active users from India.we have a prediction about it

According to the reports from Whatsapp,Users in India are using the Whatsapp video calling feature to the extent level of 50 million minutes per day.Assuming that Whatsapp had 20 crore monthly active users in India then,that would be around 7.8 minutes per user per month or 15 seconds per user

12 Best Freelance Websites that can offer you a Job

WhatsApp wants to start advertising to earn money with its users