On all iPads and iPhones in the mobile Safari browser, Google search is the default. So that google  continues to be the default search engine on all Apple devices, uses Google CEO Sundar Pichai deep into their pockets.

Google is not content to dominate the search market on the desktop. On mobile devices, the group from Mountain View wants to dominate the market with their own Google search.

Google Search on Android and iOS

From the perspective of Google is already a positive picture is emerging here as a whole. Finally, the Google search is already set on all devices with Android operating system by default.

And even with competitor Apple one is the default search engine. However, for that you apparently uses the Google management on the wallet.

An analyst of investment and advisory firm Bernstein, Toni Sacconaghi, has found that Google has three billion dollars to Apple for the top position in the field of mobile search on all iPads and iPhones – every year.

Why the three billion dollars make sense to invest

Now you might wonder if it is really worth it for Google to take as much money in hand, just to be the default search engine on Apple.

The answer is: Of course – and there are several reasons. First of all, Google will through this investment an unchallenged monopoly position in the field of mobile search. 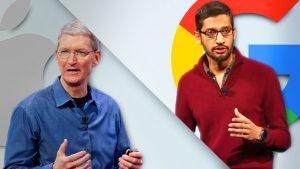 With all Android and iOS devices Google draws from more than 90 percent of all mobile searches. A serious competitor (Bing, Yahoo, Yandex), there is simply not considered globally.

In addition, iPhone and iPad owners are a highly attractive target group. Half of the Google search generated in the mobile sector revenue-Apple users – even though significantly more searches come from Android devices.

And not only to Google in Mountain View, the cooperation triggers joy. Also, a few kilometers away in Cupertino the deal for happiness makes.

On the one hand, Apple CEO Tim Cook and its users have an excellent search engine available, without paying money. On the other hand, the three billion dollars polish neatly on the consolidated balance sheet of Apple.

Google would be responsible for five percent of total Apple profits this year. The share of profit growth compared to last year is once again significantly higher with 25 percent.

The deal with Google Search is so for both sides a win-win situation.

This Facebook Messenger bot will find your dream job

Google Ads is the Most Effective Ad Platform...

Marketing and Brand Management: What’s the...

The Cure for Project Failure –...