In keeping with OnePlus tradition, this year’s OnePlus 5 is an aggressively spec’d phone that aims to be a more affordable alternative to the iPhones and Galaxies of the world, without too many compromises in build quality, hardware, and user experience.

The OnePlus 5 is more of an evolution, rather than a revolution, building on top of an already established formula. It is not a dramatic rethinking of the OnePlus phone as a concept, but it does introduce a few interesting and noteworthy things of its own, and it also comes at a higher price than last year’s OnePlus 3T.

But even with the heftier price tag, the OnePlus 5 is still some $300 cheaper than the Samsung Galaxy S8+, and we’re talking about the 128 GB of storage/8 GB of RAM version here. It is an absolute bang for your buck on paper, but can it actually compete with the best of the best? With that said, let’s see how the OnePlus 5 does against Samsung’s finest – the Galaxy S8+. 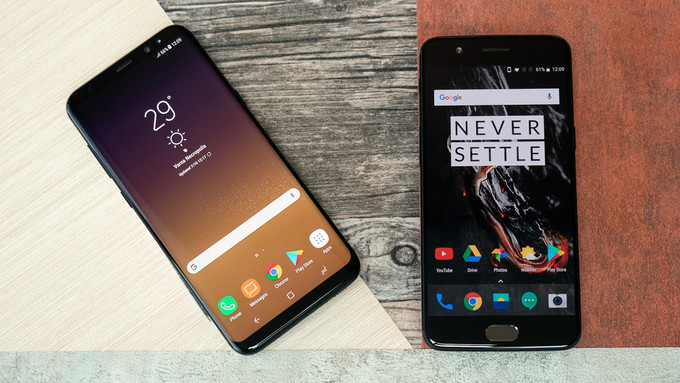 You can’t really talk about the design of the Galaxy S8/S8+ without mentioning the new “Infinity” display, since the phone’s entire design is engineered around it, for better or for worse.

Due to the new 18.5:9 display eating up so much of the phone’s front side, there’s little to no bezel left on the top and bottom of the device, which is one of the factors contributing to the S8’s dazzling looks.

The almost non-existent “chin” under the display has also lead to an arguably major design change for Samsung and its Galaxy line of smartphones – namely, the separation of the home button from the fingerprint scanner and the re-location of the latter on the back of the device.

Although we didn’t have any problems reaching the fingerprint scanner on the back of either the S8 or S8+, some people around the office did not like the new placement of the sensor one bit, and we can certainly see why.

If you have smaller hands, it could be an annoyance, but even if you don’t, smudging away at the camera while trying to unlock the phone is pretty much unavoidable until you get used the scanner being right next to the lens.

The OnePlus 5, on the other hand, features a more traditional industrial design with larg-ish bezels on the front, the bottom of which houses a fingerprint scanner/home button combo front and center with the standard Android navigation buttons to its sides.

Unlike the almost all-glass S8, the OP5 has a full metal body with a matte finish, which contributes to its all-around lower-key looks, and it also doesn’t attract fingerprints like crazy. Curiously though, we’ve found the OnePlus 5 to be one very, very slippery phone, so you might want to keep this in mind.

While the OnePlus 5 has the S8+ beat when it comes to specs, Samsung’s flagship is IP68-certified, meaning its water- and dust-resistant, and it also supports wireless charging and features expandable storage, neither of which traits it shares with the OnePlus 5.

There’s no contest here – the “Infinity” display on the Galaxy S8+ looks absolutely stunning and overshadows OP5’s 1080p panel both in terms of size and resolution, as well as brightness.

Well, to be absolutely fair, since the display of the S8+ is not in a traditional 16:9 aspect ratio, but rather 18.5:9, it is taller than OP5’s 16:9 display, but it’s also narrower, so it’s not like its actual area is all that larger.

When the two phones are held side-by-side, however, it becomes immediately clear just how much brighter S8’s display is. While OnePlus 5’s Optic AMOLED display is not bad per se, it can’t hold a candle to the S8 when it comes to visibility under direct sunlight. Samsung’s new display is one of the brightest out there.

How To Unlock Your iPhone – What Should...

Poor Gaming Performance: How To Fix And Avoid...

Back up your smartphone, Don’t leave the door...

Top Factors To Consider When Purchasing...

How To Unlock Your iPhone –...

Poor Gaming Performance: How To Fix...